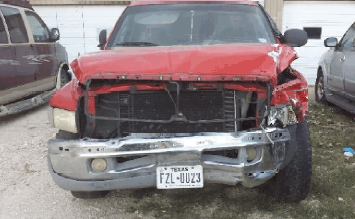 On the afternoon of August 3, 2016, our client who we will refer to as Mr. Flores, was on his way home to pick up his wife, Mrs. Flores, and take her to the hospital. Mrs. Flores was experiencing contractions related to childbirth. It was not the couple’s first child, but Mr. Flores wanted to be there for his wife as much as possible. Mr. Flores was traveling eastbound on a four-lane highway in Travis County, Texas, approaching an intersection. He was traveling in the far-right lane of travel.

The negligent driver, who we will call “Moab”, driving a Commercial Cargo Van, in the course and scope of his employment with a cleaning company (“Mr. Clean”), was traveling on the same road as Mr. Flores, but Moab was located in the turn left lane of travel. Suddenly and unexpectedly, Moab changed his mind about the route he wanted to take, and instead of turning left, he traveled across two lanes of travel, colliding directly into Mr. Flores’s vehicle. Moab testified during his deposition that he was using a GPS. He knew how to operate GPS devices and knew that when a driver changes his or her mind about the route they want to take or if they take the wrong road, the GPS will “re-route” and offer the driver an alternative trajectory. Despite knowing that, Moab opted for driving negligently.

Moab’s trajectory on the day of the collision is indicated below in white and Mr. Flores’s is indicated in red.

When Mr. Clean failed to take responsibility to pay for Mr. Flores’s damages and losses, Mr. Flores was forced to hire Ramos James Law to represent him in court. Our law firm filed suit right away and diligently prosecuted the case. Ramos James Law alleged that Mr. Clean’s driver Moab was negligent at the time of the crash and caused injuries to Mr. Flores. Additionally, we alleged that Mr. Clean was negligent in hiring, supervising, training, and retaining a negligent driver like Moab. Depositions took place not long after the lawsuit was filed.

Mr. Clean appeared for deposition through their corporate representative. Mr. Clean testified that their office manager at the time of the hiring of Moab and through this incident, was the person in charge of hiring technicians for the company. The office manager was also in charge of reviewing the materials submitted by the applicants. Mr. Clean’s hiring procedure would consist of posting an advertisement on “Craigslist” or “Indeed” then having the applicant send a resume as well as fill out an online application, which contained a self-evaluation for the applicant. The office manager would then interview the applicant.  Moab’s references were not requested and consequently, not verified, as part of the hiring process. Further, in the case of Moab, he did not even submit a resume and his interview was conducted via telephone.

Ms. Clean testified that the training provided by them consisted of training at the office only where the company would go over their employee handbook “very meticulously” and then the applicant would train with a technician for three days. Mr. Clean testified the hirees are also trained with regard to safe driving, speed limits, and where to park, among others. After the first day, the hiree does a drive-along with one of the company’s lead technicians where the hiree practices the training, including driving.

In an unexpected turn of events, Moab contradicted Mr. Clean at his deposition. Moab denied receiving any training regarding safety or safe driving. Moab also denied ever reading the company’s employee handbook issued by the company. Of note, Moab denied that the company required him to take a defensive driving course following this wreck and stated that he took it out of his own volition.

At the corporate representative’s deposition, Mr. Clean stated the company conducted an “extensive criminal and driving background”. However, the employee file kept by Mr. Clean on Moab did not contain copies any such background check. Mr. Clean stated that failure to disclose a traffic citation during the application process would be cause for termination. Interestingly, Moab’s employee file did not contain a disclosure at the time of his employment application of his prior speeding violation of April 28, 2016. Further, Mr. Clean testified that they were not aware that Moab did in fact receive a traffic citation prior to the accident.

Although Mr. Clean testified that Moab was re-trained after this wreck occurred, and that Moab completed a driver’s education course, Mr. Clean still declined to accept any responsibility for the collision. Their position was that it was just an accident and accidents happen. Mr. Clean stated that no disciplinary action was taken against Moab for this collision.

Moab did not accept full responsibility for the wreck. Moab assigned himself 70% of fault for the accident, clearly assisted by his defense attorney in arriving at that percentage. Moab stated Mr. Flores was driving too fast. However, when our attorney cross-examined him, Moab had no evidence to offer that Mr. Flores was speeding other than his own speculation and he had no way to corroborate that statement: Moab did not take any measurements of speed and could not otherwise offer any proof.

A significant issue during Moab’s deposition is that he did not seem forthcoming regarding his prior traffic citation history. Moab denied ever receiving speeding citation. He also denied ever being given a citation for this wreck or for a prior speeding violation. Moab was cross-examined by our lawyer regarding his traffic history. Once Moab was confronted with all of his prior citations which we obtained through our investigation, Moab recanted his earlier testimony. Moab also denied driving over the speed limit with regard to the speeding ticket he received. He testified as follows:

After these depositions took place, the defense focused on minimizing Mr. Flores’s injuries. As a result of the accident, Mr. Flores had to get a shoulder surgery, months of physical therapy, painful steroid injections, imaging studies, and orthopaedic consultations. Mr. Flores’s orthopaedic surgeon was recommending a second surgery, this time a much more invasive and risky one: to his spine. The first tactic by the defense was to request that Mr. Flores submit himself to a Defense Medical Examination, where their hired expert would poke and probe Mr. Flores to find ways of minimizing his injuries and contesting them. Our law firm vigorously opposed this examination and the court sided with us. The defense’s motion was denied.

The defense wasted no time and they hired their own expert, an orthopaedic surgeon who contested Mr. Flores’s surgical recommendation. The defense also argued that Mr. Flores’s past medical expenses were unreasonable. They hired an expert to testify that Mr. Flores should only recover about 25% of his medical expenses to date, because the amounts he was charged were unreasonable. Obviously, an injury victim has no say on what medical providers will charge him. None of us do.

Our law firm quickly filed Motions to Strike both of the defense experts and sent a settlement demand detailing all the evidence that supported Plaintiff’s claim. In addition, our law firm was not going to give the defense the benefit of the doubt and allow them to drag us through a mediation while the case sat still for weeks. We scheduled all of their expert depositions to take place immediately after mediation, should the case not settle.

Fortunately, the defense law firm and the carrier finally evaluated this case fairly and probably saw the risk in taking it to trial. Ramos James Law was able to bring justice to Mr. Flores and his family in the form of financial compensation which will leave them debt free from the medical bills and out of pocket expenses incurred as a result of this wreck. We are grateful that Mr. Flores put his faith in our law firm and allowed us the opportunity to be his voice when he needed us.

If you or anyone you love has been injured in an accident, call Ramos James Law now at