My Wish For Gabriella 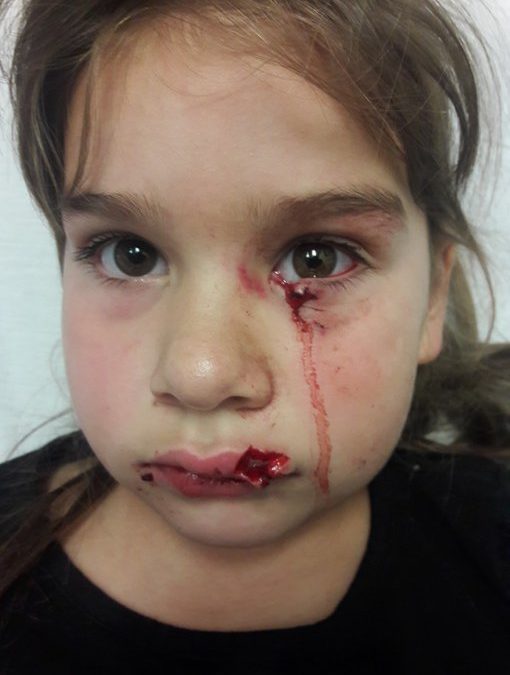 This graphic photo shows little Gabriella’s facial injuries sustained in December of 2017. At that time, five year old Gabriella Gonzalez was waiting for a flight at Portland International Airport, when she was mauled by a pit bull. A dog bite victim deals with very unique injuries that most people will never experience in their lives. A dog bite victim who is a child goes through an entirely different experience due to their young age. Aside from the shock and trauma of being attacked, usually unexpectedly, and sustaining disfiguring injuries that can tear, cut through and basically shred skin and muscle, the emotional aftermath is hard to imagine. Let me help you understand.

When the injuries are so disfiguring that organs or body part are at risk, the main focus in the emergency room will not be in preserving the victim’s physical appearance, at least not as a priority. Once the victim has been stabilized, an incredibly long road to recovery ensues.  That typically means reconstructive surgery. A dog bite child victim may need, not one, but several reconstructive procedures throughout the course of his or her childhood. Because their bodies are not fully formed and in constant growth, surgeons need to operate and then monitor to see how the new configuration develops with the years. That’s right, years. Those surgical procedures are very costly, and because they are not technically “required”, many health insurance companies will not cover them.

After one reconstructive surgical procedure, bandages are often placed over the surgical site to protect it. Those bandages have to be worn for several weeks, to protect the vulnerable surgical site. Can you imagine a six- year-old little girl having to go to school wearing a huge bandage across her face for weeks? Think about it for a second. The questions that her classmates will have for her and the looks that she will get on the street. Of course, kids can be mean and they can be harsh. They can give nicknames. They can be bullies.

With all the technological and scientific developments nowadays, it is easy to assume that surgical scars can be removed easily and entirely. The unfortunate truth is that that is not the case. Even the most cutting-edge technology has not arrived yet that can guarantee that skin, cartilage, tendon or muscle will heal to 100%, without discoloration and without malformation. When those scars are located in an area that’s readily apparent, like a child’s face, many times it makes it harder for the victim to “move on”. The scars are an everyday reminder of the trauma and the pain.

When a dog bite attack happens to a child, it is easy for some to blame the parents, even if they had absolutely no fault. And then there is not one victim, but two or three, as the parents will likely deal with frustration and feelings of guilt for decades to come.

The emotional injuries, especially for a child victim who is an animal lover, are particularly difficult to understand for those who have never experienced them. Many times, the child victim has to re-learn to trust dogs and other pets. Some do and some never quite get to do so. All of these emotional injuries often require lengthy psychological counseling for, again, years to come. I know it from personal experience.

When I was attacked by a German Shepperd, I was three years old. I actually remember it, very vividly. I am now thirty-five years old, definitely an animal lover, and still tense up every time I see a German Shepperd at a distance. Most days, I don’t think about the attack. But sometimes I do. And I never blame Petunia, the dog. I blame the owners and I so wish they had been held accountable for negligently securing their dog, who attacked me unexpectedly due to their unsafe actions. The dog did not know any better and neither did I. But the owners were in a position to prevent the attack and didn’t do so. The attack lasted a second, but the aftermath can still be felt. A good thing that came out of that awful incident is that it led me to become a personal injury lawyer, a profession that puts me in the position to help other negligence victims and their families.

I am proud of Gabriella’s parents for seeking legal help from a personal injury law firm, something that was not available to my parents when I was a child. My wish for beautiful little Gabriella, and her family, is that their scars heal better and quicker than mine did and that they can get all the justice they deserve. I hope their legal case serves as a lesson for those who tend to disregard the safety of others. I hope a judge or jury finds them responsible for this horrible occurrence and that they finally implement and enforce measures to prevent future attacks.